Today the group discusses how you solve your child’s sleeping problems. It gives rise to a lot of discussion. Thamar, a 15 year old girl, is the only one who comes up with a solution: “Sometimes I let my baby cry a little longer. I don’t go to him straight away. In the beginning, I swaddled him, but you can only do that with very small babies”, she explains to the group. She also shows them the White Noise app on her mobile phone. The peaceful sounds help her baby to fall asleep. She says triumphantly, “It really works!”

The community child health physician: “Thamar was very shy at first. She had to get used to being seen as an adult. The group really respects her and gives her plenty of support. I saw her blossom. She would have never stood in her own power if she had received traditional community child health care services.”

Thamar: “I am not taken seriously in my own environment, but in the group I feel like a real mother.” 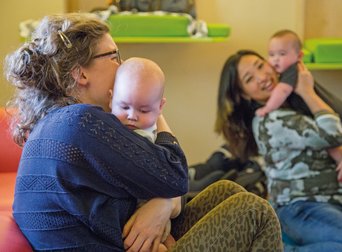 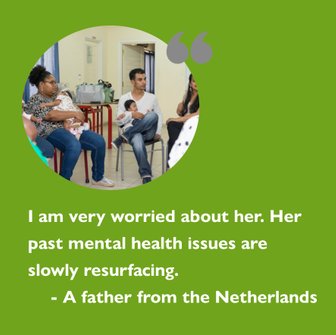 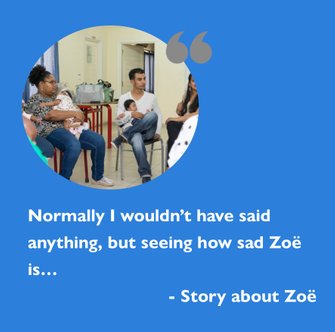 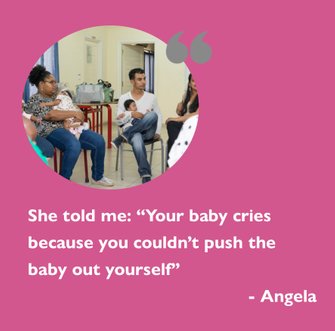 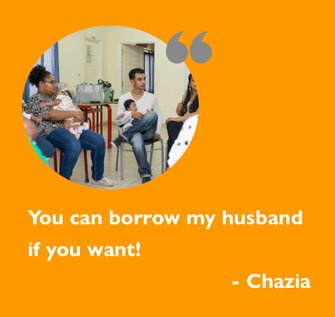 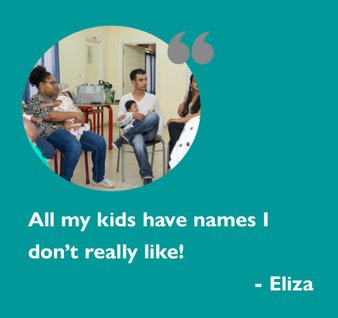 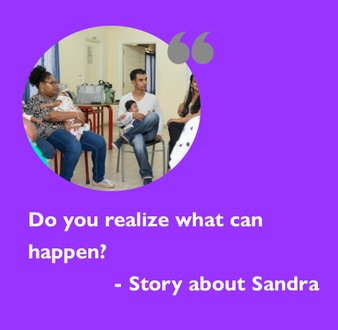 “What makes you feel proud and what makes you feel less proud?” asks the community child health physician. The parents write down their answers anonymously on paper. Crumbled up, these paper balls lie in a small heap in the middle of the group circle. One after another, the parents read each out loud. Almost all the partners take part in this session, except for Mila’s husband. When her paper is read out, they learn that she is proud of her birth and how well she is able to look after the baby. She is not so proud of her husband. He doesn’t support her and leaves her alone to raise their child.

The group is visibly touched by Mila’s story. Her husband was not very happy when she got pregnant. Now the baby has been born, he doesn’t want to have anything to do with his daughter. Mila feels very alone. The other mothers in the group decide it is easy to help her out. They visit her regularly and help her with practicalities like giving her a lift to go shopping (Mila can’t drive). Every now and then they babysit for her or just drop in for a cup of tea.

The discussion also touches the men in the group. One of them is much occupied with setting up his own business and wonders if he is giving his wife enough support. Fortunately she reassures him. One of the other men is on his own because his girlfriend is on holiday. He is very worried about her. Her past mental health issues are slowly resurfacing. He promised his girlfriend that he wouldn’t tell anyone about it, he tells them in tears. Using the baby’s sleeping issues as an excuse, the community child health nurse pays a home visit. His girlfriend finally gets the help she needs.

The community child health physician: “Even personal subjects are discussed in the group. In one-to-one care, these stories would have surfaced too late or not at all. This man was very burdened by the responsibility he was carrying alone. Fortunately, in the group he found a safe place to share his concerns”

During the last parenting session when the children are all about 15 months old, one of the mothers, Zoë is looking pale. She is not herself. The group is concerned, asking how she is doing. Zoë starts to cry. She has just had a miscarriage. Another mother in the group says that she recently went through the same thing. “Normally I wouldn’t have said anything, but seeing how sad Zoë is…”

New stories burst open in the group. They start to talk about who is planning another baby and when.

The community child health physician: “It was heartwarming to see there was space for Zoë’s sorrow and how well they supported each other. Moreover, the subject of preconception care was introduced quite organically. The sessions are very dynamic. With the children crawling around on the floor, it gives us (the facilitating care providers) insight into child-parent interactions and how the children explore the environment. During a short traditional one-to-one consultation, most children sit on their parent’s lap, giving us less opportunity to observe.”

Stress occurs in many families. Dealing with stress is therefore an important topic during the group sessions. This theme is usually introduced by playing ‘the stress-game’: with the help of cards with written subjects on them and a coin. Participants use the coin to indicate what things are stressful for them.

A coin is placed on the card that reads ‘family’. The facilitator asks, “Who wants to talk about this?” Hesitantly Angela starts talking. The coin is hers. Her baby cries a lot. “Your baby cries because you couldn’t push the baby out yourself”, her grandmother has told her. This hurts Angela. It wasn’t her fault that her labor took so long, and that the baby’s heartrate went down…”

The group thinks it is ridiculous that her grandmother makes her feel guilty like that. It is a nice reaction, but the facilitator feels that it doesn’t help Angela. She asks everyone in the group to give Angela good tip. What can you do in this situation?

Angela goes to work with one of the tips. But secretly what helped her the most was that everyone in the group thought that her grandmother was being ridiculous. She is certainly not a bad mother!

The community child health nurse: “Angela went home with a big smile on her face.”

The periodic child vaccinations are given during the group sessions. It is always a tense afternoon. None of the parents find it a pleasant session. For that reason, parents often come together. However, Chazia is there alone because her husband is at work. She is scared of the vaccinations and her baby always cries loudly.

One of the other women calls out, “You can borrow my husband if you want!”

The community child health physician: “Because that husband actually went with Chazia while her baby was being vaccinated, she was less stressed. This made the baby relax more and he stopped crying.”

A new baby can put pressure on the parents’ relationship. This is also a standard topic during the parenting sessions. In the opening game in today’s session, the participants are asked to explain how they named their children. “All my kids have names I don’t really like”, Eliza blurts out.

The other parents are surprised and outraged. “I prefer short and strong names, but my husband likes exactly the opposite”, she explains. “It was easier to just give in to him.” In daily life Eliza is a strong well-educated professional, but privately and at home, she often feels insecure. The group works it through with her. “During which other moments do you feel insecure and how do you handle them?”

It is not easy for Eliza to share this with the group. It is scary to put yourself in such a vulnerable position. She is not used to that. “But I am not afraid to talk about it with you”, she says to the group.

The facilitator: This is a classic short story with a big impact.”

There is one mother in the group who regularly smokes a joint. The community child health physician and the group members know about Sandra’s habit. She also smoked joints during pregnancy.

Sandra’s baby is weighed during the baby check-up. The children have to be undressed beforehand. Sandra is absent minded and leaves her baby unattended on the dressing table and her daughter almost falls off. One of the other mother’s jumps up just in time to prevent this.

The group is shocked. Sandra admits that she had smoked a joint before she came to the group session. “Do you realize what can happen?” one of the mothers asks her. Sandra cries softly.

Together with the group, Sandra decides not to smoke joints when her daughter is awake. She can’t quite stop yet altogether.

The community child health physician: “It was beautiful to see the way the group dealt with this incident and how they supported each other. By the end of the group care sessions, her smoking was reduced to a minimum.”

Researchers and policymakers regularly hear impressive stories about the results of group care according to the Centering model, which are not visible in research results. These stories from healthcare show in a different way how group care works. With the help of interviews with women, midwives, nurses and doctors, these powerful and often moving stories will be collected and written down during the GC_1000 project.

The process of implementing group care will start at the end of 2021. The following stories have been collected before 2020 and were published in the book "Little Pearls, short group care stories with a large impact". The book was a joint publication of TNO, the KNOV, the Centering Nederland Foundation and Group Care Global. The book was first distributed in the English version at the GC_1000 launch meeting in Leiden, Netherlands, February 2020.

We would love to hear your group care story, big or small! Please send an e-mail to suze.jans@tno.nl to share your story.

This project has received funding from the European Union’s Horizon 2020 research and innovation programme under grant agreement No 848147. This website reflects only the authors' view and the European Commission is not responsible for any use that may be made of the information it contains.